Visions of the future

The future of “bone density measurement” will probably belong to imaging processes, ie methods which, like our preferred high-resolution, peripheral, quantitative computed tomography, not only measure the pure bone density, but also above all enable the visual representation of the bony microarchitecture. Using a large number of two-dimensional tomograms, this technique allows an indirect three-dimensional assessment of the fine bone structure. In the meantime, however, a follow-up device has been developed which for the first time can create real three-dimensional images of the interior of the bones directly on the patient. We hope to receive one of these new devices from the first series production in 2004. 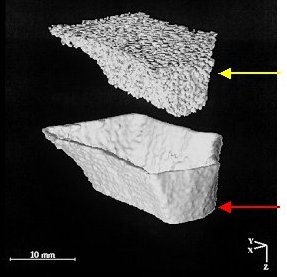 This offers several advantages: on the one hand, an even better qualitative assessment of the bone structure and, on the other hand, a quantitative assessment of the bone structure. Thanks to the latest computer technology and specially developed, complex software, it will be possible in the future, for example, to calculate the number of trabeculae in the examined area and even the thickness of the individual trabeculae. The increase or decrease in the number of trabeculae or the thickness of the trabeculae during a treatment or over time may open up completely new dimensions for us in assessing the effects of the treatment. Up to now, this was only possible to a limited extent with a special so-called micro-CT, with which one could only examine a bone sample previously taken from the iliac crest, a so-called bone biopsy. With the new devices, this can be done directly on the patient and is also completely painless.

The picture shows part of a forearm bone. Using special software, it is possible, for example, to remove the trabeculae (yellow arrow) from its cortical shell (red arrow) and to assess both components separately – e.g. with regard to the number of trabeculae, the trabecular thickness or the distances between the trabeculae on the one hand or thickness or On the other hand, the nature of the cortex. (Image courtesy of SCANCO Medical AG Zurich, Switzerland. More images at www.scanco.ch)