However, this differentiation for the diagnosis by means of bone density measurement requires a method that can also detect these two bone components separately (selectively), which in turn is only possible with computed tomographic methods (see also sub-item “Diagnosis – Bone Density Measurement) and not, for example, with ultrasound or the DXA method. The DXA method, which is still often referred to as the “gold standard”, has the advantage that measurements can be made on the bones on which the most serious fractures occur, i.e. the spine and the femoral neck; However, it cannot differentiate between the two bone building blocks and thus also not type I osteoporosis from type II osteoporosis. This disadvantage is somewhat offset by the fact that the vertebral body consists mainly of trabecular bones and the femoral neck consists mainly of compact bones, but the trabecular and compact bone densities can be measured directly with computer tomographic bone density measurements. And since osteoporosis is a systemic bone disease and the osteoporotic bone degradation affects the trabecular and compact bones in the entire skeleton to a greater or lesser extent, the measurement on the spine or the femoral neck does not necessarily have such a weighty advantage that the designation “gold standard” justifies. 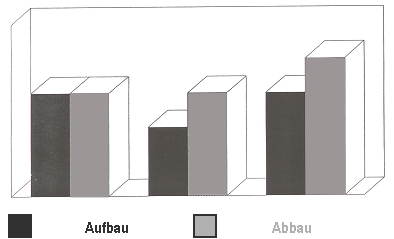 However, this has decisive consequences for the therapy, because in the case of an increased bone loss rate we have to try to slow down this increased bone loss or even better stop it completely, whereas in the case of a balanced metabolic situation we could try to increase the bone formation rate. Accordingly, we differentiate between drugs that either slow down an increased rate of bone breakdown (“antiresorptives”) and drugs that stimulate the rate of bone breakdown. This differentiation of osteoporosis makes sense both with regard to the underlying pathophysiology (metabolic-causal) and with regard to the treatment strategies that result from it (see subsection “Fast and Slow Loser Concept” under bone density measurement in the subsection Diagnosis). We consider this concept to be much more practical, both in terms of the indication (necessity) of a therapy (even if the bone density is not yet significantly reduced) and the choice of therapy (inhibiting bone loss or stimulating bone formation). If the rate of the underlying bone loss is fast, the main thing we need to do is to brake this increased rate of bone loss (just as you put the handbrake on a car parked on a sloping street). If the rate of bone loss is not increased, but the bone density is already significantly reduced (stable bone turnover ratio, albeit at a low level), we should primarily try to increase the rate of bone formation (comparable to the situation in a car when the battery is empty and we are the car need to push to start).

The accelerated degradation of bone does not “dissolve into air”, but is “broken down” into smaller building blocks, which are transported in the blood (e.g. beta crosslaps) and excreted with the urine (deoxipyridinoline). Accordingly, these degradation products, which occur more frequently, can also be detected in the blood and urine (here, however, certain conditions are necessary with regard to the point in time at which the blood is drawn or the urine collection and with regard to the further processing of the samples, which must be precisely observed in order to obtain accurate results). The diagnosis of manifest osteoporosis describes a clinical picture which has already led to osteoporotic bone fractures – regardless of the bone density measured in each case. So if osteoporotic bone fractures – especially vertebral fractures – have already occurred, this situation is definitely in need of treatment!

The division into primary and secondary osteoporosis is important for therapy for other reasons. Often the exact cause of the osteoporosis cannot be determined – in this case we speak of primary osteoporosis. Primarily in medicine it is mostly an interesting-sounding paraphrase for the fact that we do not know the actual causes. Since osteoporosis is usually a so-called multifactorial disease (i.e. there are numerous causes that are often mutually reinforcing), the medical history (personal medical history) and the presence of risk factors play a central role. Sometimes, however, other underlying diseases (chronic intestinal disease, hyperthyroidism, etc.) or the intake of certain medications (cortisone, marrowam to thin the blood, neuroleptics – antispasmodic drugs – or excessively high doses of thyroid hormones) are the actual triggering cause of the pathologically increased bone loss.

In these cases we speak of secondary (based on other causes) osteoporosis. Here, of course, the treatment of the underlying disease or the reduction of appropriate medication (if possible!) Is in the foreground, as this even enables a causal (causal) treatment. If the underlying disease (e.g. chronic intestinal disease such as Crohn’s disease or ulcerative colitis) cannot be cured or a reduction or discontinuation of the respective medication (e.g. cortisone for rheumatism or asthma) is not possible, the osteoporosis must be symptomatic as well (as with primary osteoporosis) be treated.